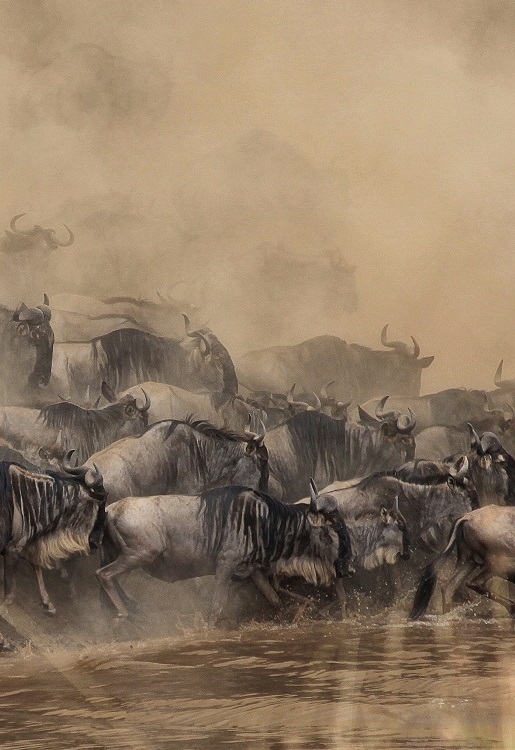 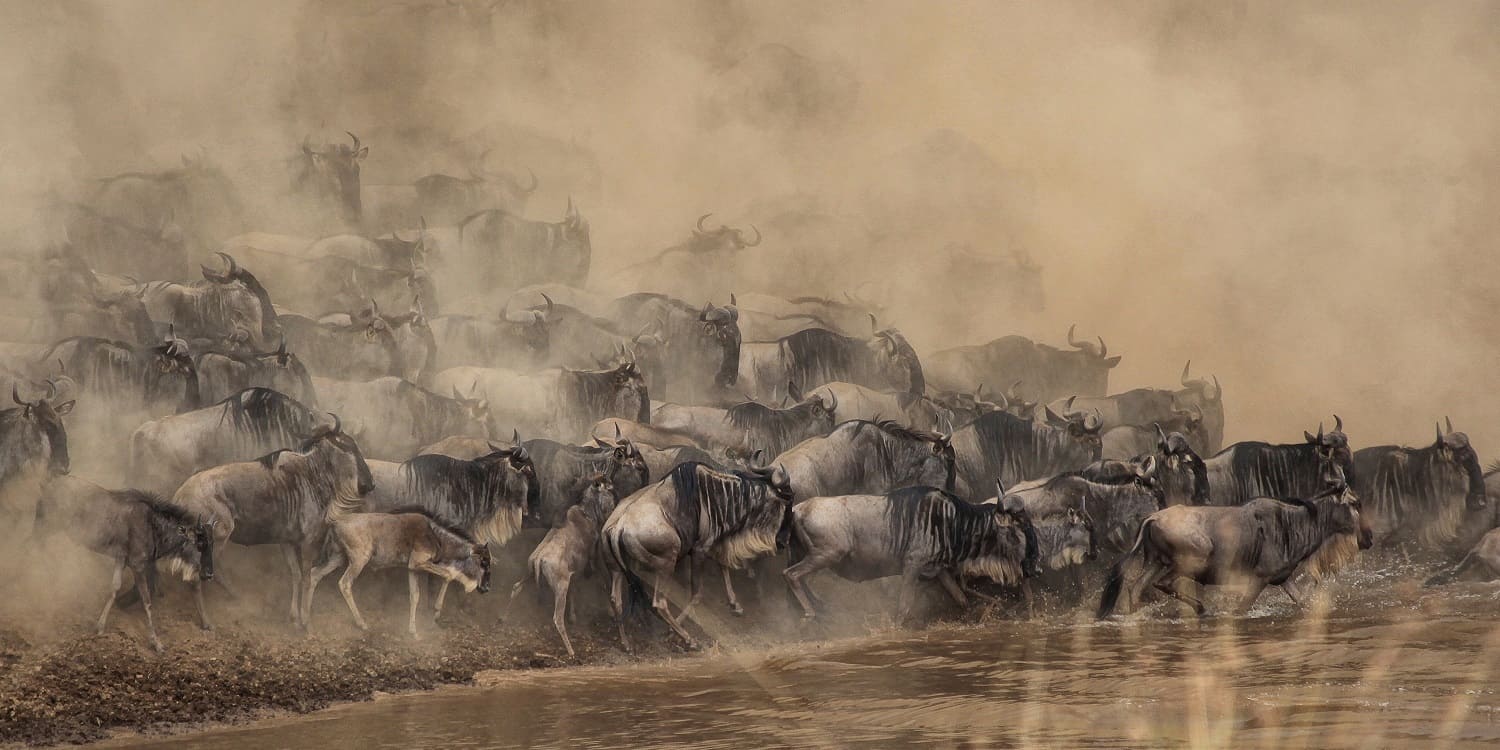 The Great Migration as it is known is the movement of a million plus wildebeest from Serengeti in Tanzania northwards into the adjoining Masai Mara Reserve in Kenya. It is one of the world's most spectacular and thrilling display of wildlife behaviour. The migration takes place every year with the animals primal instincts guiding them towards greener pastures following the climatic rain fall patterns over the Serengeti-Maasai Mara eco system. For the 2021 and 2022 seasons we recommend planning your travel for mid July as this is when the migration typically starts proper with the larger herds of wildebeest starting the move into Masai Mara. The migration takes place till end of August, before declining into mid September.

Although numbers vary every year, past migrations have seen upto 1.5 million wildebeest, close to a million Zebra and large numbers of others animals undertake the long trek that lasts many weeks. Their journey is especially frought with danger as they cross the crocodile infested Mara and Talek rivers along the way, during which many cannot escape the giant nile crocodiles lying in wait for their prey.

A Guide to the Wildebeest Migration

Travelers planning a safari to Kenya often have many questions related to the migration and we are listing the most common below for the sake of brevity.

What time of the Year is the Wildebeest Migration ? Though the migration into Masai Mara typically starts in July and ends late September, the exact dates around this period are not predictable until the first large wildebeest herds actually gather at the northern edge of Serengeti as they near the Mara. These initial herds are sometimes known to gather at a spot for days on end without crossing over to the Mara, so when exactly the final leg of the movement starts is difficult to predict.

Where do the wildebeest migrate to and from ? The movement of the wildebeest is from Serengeti into Masai Mara and is dictated by factos such as the climate, pasture and mating and calving seasons. Keep in mind the wildebeest are migrating through the year in a generally clockwise direction covering vast areas reaching into Southern, Central and Western Serengeti before the year long trek brings them to Masai Mara around July to August. Their journey back to Serengeti happens around late October though this is less spectacular and more like a slow dispersal.

How do you see the Wildebeest Migration ? You can see the migration during a safari gamedrive in the Masai Mara Game reserve which is conducted in specialized vehicles driver by experienced Driver-Guides. As there are several core points where the wildebeest cross the rivers, it may be neccesary to access and station oneself at these points during a day-long outing in the reserve as some of the lodges and camps can be upto an hour's drive from the ideal vantage points. Most tourists who come specially to see the migration consider seeing the river crossings a highlight of their tour and therefore want to spend enough time at these crossing points, which by the way tend to vary slightly every year while staying within a generally simialar sub locality of the reserve.

Many people think that the Great Migration only happens once in a year, but the migration is in fact an all year round phenomenon event - offering different unique and exciting wildlife experience at various times of the year. The River crossing is one of the most requested event of the migration and usually coincide with the peak safari season, therefore the assumption that this is the only time of the year that the wildebeest are on the move or can be seen. This crossing usually occurs at Mara River around late July to August with parts of September and again on their return south, around the last two weeks of October through early November. Hence, the best times to track and see the annual wildebeest migration in Masai Mara. Below is a general breakdown of more or less where the herds are during the year, bearing in mind it's difficult to predict the herds movement as it's prompted by rain, which can be early, late or ‘on time’.

Depending on the rains, the herds can be seen south of Serengeti National Park between Ndutu plains and Ngorongoro plains. Hence, the best place to be during these four months is the far south of Serengeti. Around February, it is the calving season and there are high chances of witnessing a wildebeest birth. The herds move swiftly, in search of favorable grasslands to provide sustenance for the arrival of their young. The predator interaction is also most likely, as the lions and leopards are moving to this region to prey on the young and vulnerable calves. End of March/early April the herds move slowly and predictably to begin their northward journey, and many have left already and are in the central and even western Serengeti.

During this time of the year the migratory herds all seem to be moving north, in search of fresh grazing and water. The migration is usually in huge columns of up to 40 kilometres / 25 miles in length can be sometimes be seen as the wildebeest funnel up into the central and western Serengeti, often containing hundreds of thousands of animals – joined by many zebra, and a scattering of Thomson's and Grant's gazelles. June marks the end of rainy season, traditionally this is the Grumeti River crossing period, but this is mainly dependent on water level of the Grumeti River ( here you may spot Nile Crocodiles). This crossing is not quite as spectacular as the crossings of the Mara River.

This is when the big event occurs, the start of major Mara River crossing. The herds have reached the western Serengeti and Grumeti Reserves and are peering closely at the brown waters of the rivers they have to cross. In August, the survivors herd continues moving northwards, into the northern Serengeti and begin crossing into Kenya's Masai Mara National Reserve. The herd breaks into smaller groups- almost half of the animals remains in the northern Serengeti, the rest of the wildebeest will have crossed the Mara River, and the majority of the herds will be in the Greater Masai Mara area, eating the lush green grass resources before venturing north towards the private conservancies (Mara North, Olare Orok).This is usually the most preferred moments of the migration, watching the frantic herds of the wildebeests crossing the Mara River.

The wildebeest herds are migrating again with more accord: all are heading south, through western Loliondo and the Serengeti National Park's Lobo area, returning to the green shoots. The herds can now be seen in Kogatende and Lamai (Northern Serengeti). In a ‘normal year’ the short rains have begun in November. The herds are now in the Serengeti, stationed in the Lobo, Mbuze Mawe and Seronera Valley areas where water is abundant. Fresh grazing sees the wildebeest clustered in the north-eastern Serengeti (around Lobo in particular) as well as the southern Serengeti. Calving begins again, the predators move in again, and the cycle of life begins all over again.